Nico Mirallegro as Chris Duffy in Six Minutes of Freedom

Pinky: You filmed 6 Minutes of Freedom over 2 weekends between Hollyoaks filming, Nico... was it a nice change acting with a new crew in your free time?

Nico: Yes it was a lovely to do something different. There was a really nice atmosphere on set which always helps when working with a new crew.


Pinky: Was it fun working with your sister Claudia (who played your on-screen sister Nicky)?


Nico: Claudia was great to work with. She did a fantastic job plus it helped that we actually get on in real life as well. The script was initially sent to claudia, and I asked if I could have a read. After reading it I thought the part would be perfect. 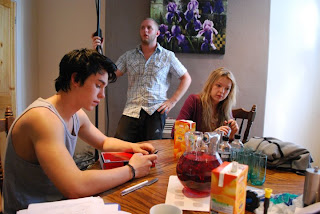 Nico Mirallegro with his sister Claudia, behind the scenes


Pinky: What do you feel about the personality of your character Chris? Did you feel sympathy or empathy with him (his insolence to his foster dad must surely have been due to feelings of alienation)..?

Nico: Chris is and was a good kid he just wants his old life back, with his mum and dad. But because his dad is not there, he decides to rebel against it. Making him an angry teenager.


Pinky: Keith Mackin, the director, was the face of Chris's real dad, in a photo. Did he originally have lines / scenes in the film?

Nico: I can’t remember if keith said he was going to play the dad from the beginning. He did a great job of it though!


Pinky: Were there any funny moments or out-takes during filming?

Nico: You always get a few funny moments when filming these sorts of things, because nothing ever really goes to the full plan. But this shoot was so tight-knit and professionally done, that it fulfilled its expectations and there weren’t really any hiccups.


Pinky: Six Minutes of Freedom won the Yellow Fever Independent Festival Film Director Award for shorts, I bet you were happy to hear that...

Nico: All of the crew deserve that. They were excellent. Keith and John the directors knew exactly what they wanted. The Director of photography was great and helped them achieve their vision. So it wasn't really a surprise to find out the film won the award. 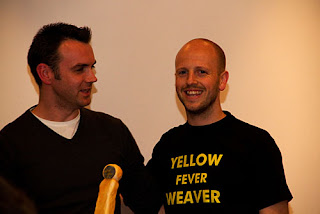 
Pinky: What do you think might have been in the mysterious letter that Chris receives... or should we all just use our imaginations..?

Nico: You’re all going to have to use your imaginations... but his dad might have something to do with it.


Pinky: Lastly Nico, what do you like best about acting in short films?

Nico: Working on short films is great because you feel free to do whatever you want. You can take as long as you want playing with the scene and trying different things to make it more interesting for the audience. It’s also such a good way of learning how things like the camera work. All of which helps you understand the art of film making.

Pinky: Thanks for the interview, Nico. :)